Carrara Marble has to be one of the most beautiful and most sought-after materials for a kitchen worktop. In fact the colour and design is used in some of the most expensive hotels, restaurants and spa’s around the world, showing it’s many functionalities. This stunning Italian born stone product oozes style and grace, Carrara is used by interior designers who will build it into the most prescious of kitchen spaces.

Kitchen worktops have to be durable, and while Carrara marble is a natural stone and very resilient, there is one major downfall, it’s ability to deal with acids and more commonly, liquids such as lemon, vinegar and red wine. The marble will generally be made up of calcium carbonate or magnesium carbonate, which react badly to acids.

So what happens to my prescious marble if it comes in contact with an acid? The marble will become ‘etched’, which is essentially a dull, whitish mark where the acid has literally eaten away at the surface.

Does this mean it can stain? Unfortunately yes, red wine, tumeric and other spices and sauces must be handled with care.

Some people like the fact that the colour of the material varies over time through use, which is seen as it’s natural charm. This can be very stressful for most people though.

If you would love to have the same style and grace, but want something with better durability and resistance to staining and etching, then you need to look at Quartz. This material is the most popular in the luxury worktop industry and we are heavily investing in this area, with many new colours being added every few months.

For now there are a number of quality Quartz alternatives from brands such as Silestone, Caesarstone and Urban Quartz, we are going to show you below. 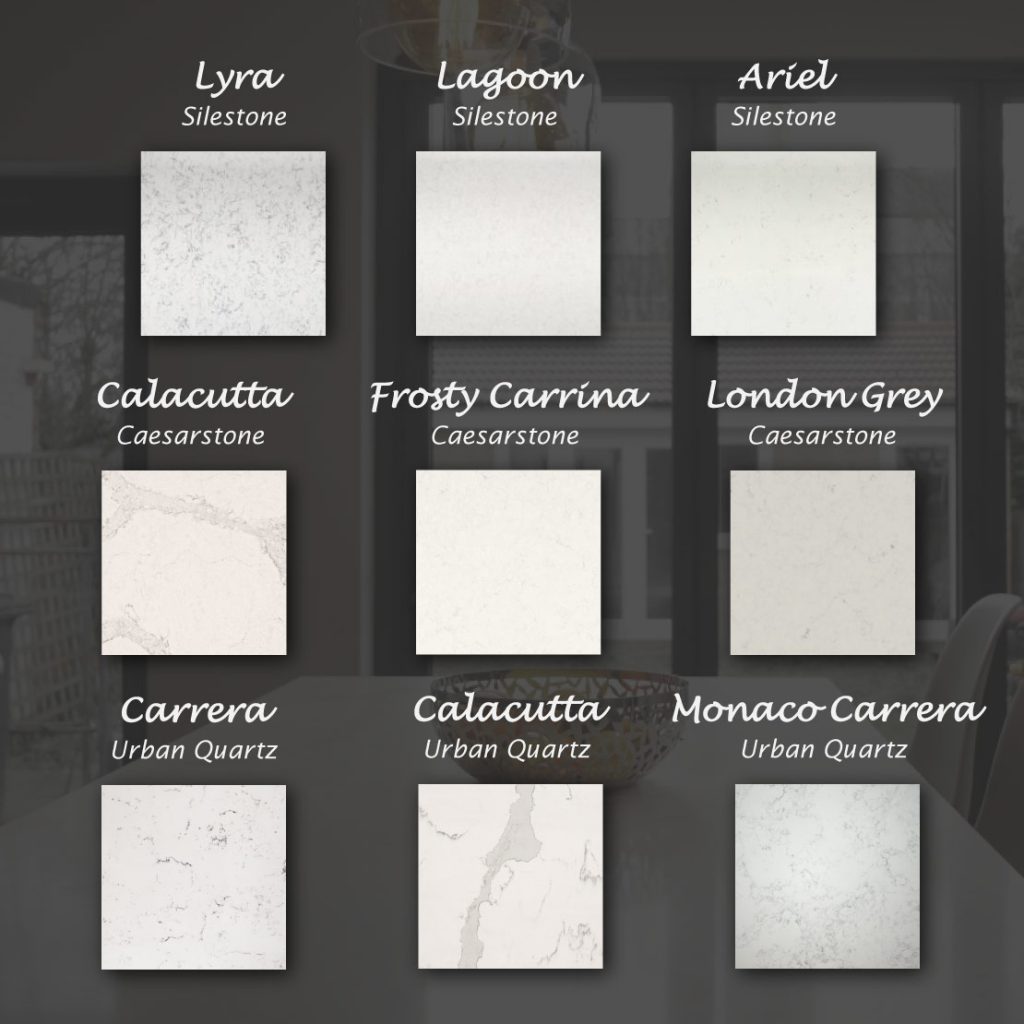 Silestone Lyra – One of the closest matches to Carrara marble, this is a white base with grey veining.

Caesarstone Frosty Carrina – Sense of depth and purity with long veining for a natural look.

Urban Quartz Calacutta – A wide and prominent veining on a white base, very similar to Caesarstone Calacutta Nuvo.

Urban Quartz Carrera – A white base colour with a black marble effect throughout.

Montblanc Calacutta – Bold statement piece with calacutta veining throughout, a pure white base

This website uses cookies to improve your experience while you navigate through the website. Out of these, the cookies that are categorized as necessary are stored on your browser as they are essential for the working of basic functionalities of the website. We also use third-party cookies that help us analyze and understand how you use this website. These cookies will be stored in your browser only with your consent. You also have the option to opt-out of these cookies. But opting out of some of these cookies may affect your browsing experience.
Necessary Always Enabled
Necessary cookies are absolutely essential for the website to function properly. This category only includes cookies that ensures basic functionalities and security features of the website. These cookies do not store any personal information.
Non-necessary
Any cookies that may not be particularly necessary for the website to function and is used specifically to collect user personal data via analytics, ads, other embedded contents are termed as non-necessary cookies. It is mandatory to procure user consent prior to running these cookies on your website.
SAVE & ACCEPT
Call
Please select a store to call
Quote
WhatsApp
Leave us a message

Fill out the form below to find out about our promotion!

One of our team of stone specialists will get back to you within 24 hours!